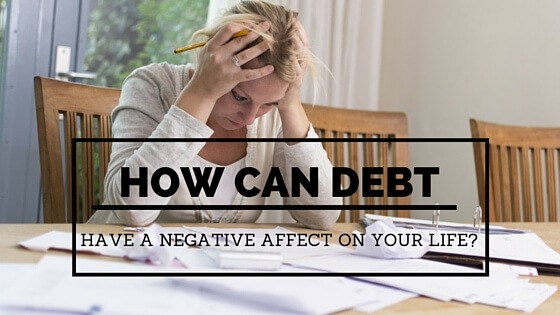 How Can Debt Have a Negative Affect on Your Life?

For many people, debt is more than a dreaded word—it’s an emotional word. Owing large sums of money to credit card companies and other lenders can certainly weigh you down financially, but it can also take a mental toll on your personal life, creating unnecessary stress and delaying life plans. After reading the following ways debt can have a negative effect in all areas of your life, vow to make some changes toward becoming financially free.

When you are in significant debt, a feeling of hopelessness can creep in before you know it. In many cases, people simply give up the possibility of ever getting out of debt, and therefore continue their frivolous spending habits, thus digging themselves into an even deeper hole. But the longer you wait to start chipping away at your debt, the longer it will take to pay it off, and the more it will hinder you from experiencing financial freedom. Even if your debts seem overwhelming, come up with a long-term plan in which you will take small steps to accomplish.

When you’re over your head in debt, it’s difficult to think about putting money into an emergency savings account. But this is actually one of the most important first steps you can take toward becoming debt free. Think about it: without an emergency account (I recommend starting with at least $1,000), if something goes wrong—such as an essential home appliance breaking down or a major car repair—you’ll be forced to go into even more debt in order to cover the expenses. But if you work little by little to establish some financial reserves, you’ll be covered when an emergency strikes. And, once you have an emergency fund established, you can start putting all your extra funds toward erasing debt.

One option to eliminate debt sooner is to increase your earnings by taking on a second job or extra freelance work. While the extra funds will likely help you chip away at your debt more efficiently, the additional time you’ll spend working can also take time away from family and/or doing the activities you enjoy. If these things are important to you, then think twice before taking on more debt, assuming you’ll be able to quickly pay it off by picking up an extra job. Instead of buying a bigger house or a more expensive car, consider making more money conscious choices in order to free up cash to pay off existing debts.

Many U.S. states allow wages to be garnished for unpaid debts and obligations. In fact, according to a recent financial study, student loans and consumer debt are the third most common reasons for docked wages, after child support and tax liens. Think about what kind of an effect having your wages docked could make on your monthly budget and your ability to pay your expenses.

In a recent American Psychological Association study of more than 3,000 adults, it was found that money and finances were the top sources of stress. You may not consider the weight of that debt hanging over your head could cause feelings of depression, but it definitely can. The good news, however, is that you can do something about it. Seeking support from family and friends, as well as a financial professional that can guide you toward financial freedom can make a tremendous difference and help you feel not so alone in the process.

If you have a goal of traveling the world, but are also several thousands of dollars in debt, you’ll most likely be forced to postpone your trip until those debts are eliminated.

While working toward erasing that debt, it might be wise to avoid large purchases for the short-term and instead focus on your ultimate goal. Otherwise, it's too easy to let small delays interrupt your future plans.

For example, beware of paying for large expenses—such as a wedding—with credit. You may find that five or more years down the road, you’re still paying off the debts you racked up for that big ticket item or event. That kind of financial obligation could even cause you to delay other steps you your life you’d like to accomplish, like buying a home.

The Bottom line: Before overspending and putting large purchases on a credit card you can’t really afford, think of the long-term effects it could have. If you’re already in significant debt, find ways to decrease spending and start to put those extra funds toward paying down outstanding debts. Make a decision today to take the first step toward erasing that dreaded word “debt” from your life for good.