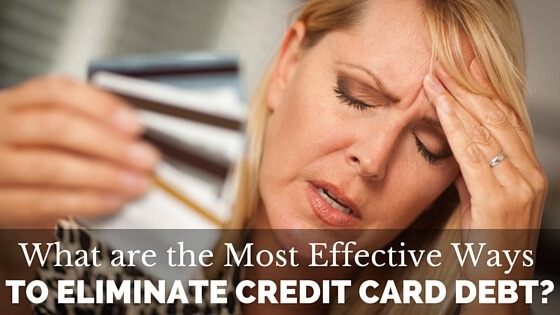 What Are the Most Effective Ways to Eliminate Credit Card Debt?

Credit cards are not necessarily a bad thing. Used responsibly and they can help you build credit, earn rewards, as well as cash back in your pocket. But unfortunately, the all-too-common temptation is to overspend, resulting in a mountain of credit card debt, plus high interest payments.

A recent Gallup poll discovered Americans that don’t have enough money to live comfortably are instead using credit cards in order to cover their living expenses and carry 36% larger credit card balances than those who say they do have enough money.

Obviously, debt is a big issue. Credit card debt is particularly dangerous due to high interest rates, and its potential of lowering your credit score and hurting your ability to secure a loan on a home or car. With that in mind, let’s take a look some effective ways to eliminate credit card debt for good:

This is a crucial step, especially if you have more than one card. It’s difficult to keep track of the various days different bills are due, so why not set up automatic payments for each card so you’re guaranteed to pay them all on time? Late payments can have a negative effect on your credit score, and they can also make your interest rate skyrocket, making it much harder for you to pay off your balances in a timely fashion.

It’s also important to ensure your checking account has overdraft protection. That way, if you happen to have insufficient funds to pay a credit card issuer one month, you’ll avoid incurring high overdraft charges as a result. Remember overdraft protection is for emergencies only, however, so don’t making a habit of depending on it regularly—especially if it’s linked to another credit card.

3. Reduce the number of cards you carry

Putting distance between you and your credit cards is a good way of removing the temptation to continue using them. Try to only keep the one or two cards you actually use for everyday purchases in your wallet and ditch the ones that may bring on the urge to overspend. It’s a good idea to do some research on your current cards’ interest rates, discounts, rewards, and other incentives such as airline miles, and stop using the cards that don’t carry the best benefits. Store-issued cards are ones at which you’ll want to take a particularly close look. These cards may carry enticing discounts or incentives for using them, but unless you frequent a particular store on a regular basis, they often don’t outweigh the risk of overspending.

Just because you’re no longer using your credit cards doesn’t mean you should necessarily cancel them, as this act could have a potentially negative affect on your credit score. But even if you do, it will probably be small compared to the benefits of becoming a better manager of your debt. Factors such as a lesser debt-to-income ratio and a consistent timely payment record can actually help your credit score soar.

The bottom line: By making consistent payments in a responsible manner and removing the temptation of too many cards in your wallet, you’ll be on your way to being credit card debt free and leading a more financially rewarding life. Make a commitment today to stop spending more than you have and instead concentrate on eliminating the monetary burdens that are weighing you down.