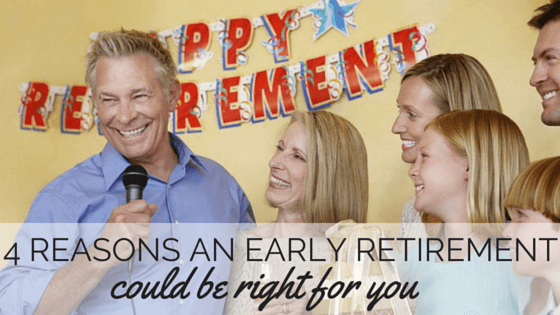 4 Reasons an Early Retirement Could Be Right For You

Is early retirement simply wishful thinking in your mind? It may not be as lofty of a goal as you may think. Let’s examine some of the reasons why retiring early could be the best option for you.

You’ve done the calculations and know you have ample funds in the bank. So why aren’t you taking the plunge into retirement yet?

Perhaps you fear your savings won’t be enough. A financial professional can help you examine whether your pensions, annuities, dividends, and other funds will meet your retirement needs. If you discover you have more than enough, then maybe it’s time to consider leaving your job a little earlier than planned.

You’re especially in good shape if you have your mortgage and other major loans paid off. And an added benefit is if there are no other people depending on your income.

So you’ve crunched some numbers and realized you’re short of the amount you’d realistically need to retire early. Even if this is the case, hope isn’t necessarily lost for jump-starting your golden years.

One way to free up some extra funds is by coordinating with your spouse when to start collecting Social Security.

You could also think of ways to earn more income during retirement. Perhaps you could start your own small business or do some freelance work for various companies. An additional way to earn some extra cash is to rent out a room via a website like AirBnb.com.

Also think of areas where you could cut down on costs. Calculate how downsizing to a smaller home could save you money in taxes, insurance, utilities and maintenance. You could also move to an area, city, or state where the cost of living is lower.

3.   You can start collecting Social Security at age 62

Some people have misconceptions they can’t start collecting Social Security checks until they reach full retirement age. Others believe they should delay collecting until age 70 so their checks will be higher. That can be a smart strategy in some cases. But remember Social Security benefits are designed to give an average of the same amount of money to retirees, regardless of when they begin collecting. If you begin collecting checks at age 70, the amounts will be higher, but you’ll receive fewer of them. Receiving the money earlier means you’ll get smaller amounts, but more checks over time. In short, the difference usually evens out. So why not start receiving the money sooner rather than later?

4.   You want to start pursuing other dreams

You’re ready to escape the daily grind of your job and pursue other adventures. Why not figure out what you need to do in order to make that happen a little earlier?

Maybe you have a dream of traveling, spending more time with family, or pursuing a new hobby.

Retirement could also provide opportunities for you to launch a small business, devote yourself to a new exercise routine, or volunteer for a non-profit organization.

Retiring early also means retiring younger. There’s a better chance you’ll be more healthy and able to enjoy what you’d like to do in your newfound free time.

Don’t disregard the idea of an early retirement as an impossible feat. Instead, spend some time talking with a financial expert, crunching numbers, and mapping your retirement dreams to see how soon you can make them a reality.