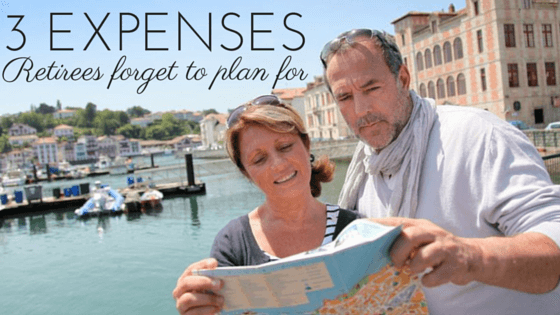 3 Expenses Retirees Forget to Plan For

I’ve discussed time and again how the significant number of Americans with little to no retirement savings to cover expenses is downright disturbing. Shockingly (or perhaps not so much), research shows one out of every three people has virtually no nest egg. One of the biggest issues stems from the tendency to underestimate the amount of money one will need.

You definitely shouldn’t assume is that Social Security will be enough to cover your living expenses. Social Security is actually only designed to replace about 40% of the average worker’s pre-retirement income.

In reality, most people will need at least 70% of their pre-retirement income to live comfortably in retirement. Depending on what your goals are for your golden years, you may require much more than that.

With the above statistics in mind, let’s take a look at some of the top expenses that seniors forget to save for in retirement:

This is definitely an expense many pre-retired folks don’t take into account. Because they don’t usually track the amount they spend on grandkids, they assume it’s not a significant expense. But in reality, recent research reveals around 25% of retirees spend more than $1,000 per year on grandchildren. That’s a big chunk of change!

While the majority of that money is usually spent on gifts, some are also designated for grandkids’ educational and living expenses. It’s important to track your spending and be aware of how much you’re contributing toward the lifestyles of your grandchildren. Is it an expense you can afford or is it causing a harmful dent in your own budget and retirement nest egg? If it’s the latter, it’s time to reevaluate things. Set a goal of what you think is a reasonable amount to spend on grandchildren at the beginning of the year and stick to it.

Retirement is a great time to explore interests you didn’t have time to pursue while you were working. Perhaps you’ve always had an appetite for travel. Or maybe you want to work on your golf game or take painting lessons during your golden years. While these are all worthy activities, they’re going to cost you. Many retirees fail to properly plan for leisure and travel expenses. They are definitely important things to consider in your budget, however, as they can boost both your physical and emotional wellbeing. According to a recent study, retirees will spend an estimated $180 billion on leisure and travel in 2016. That’s a number that will only rise with inflation in the coming year. Yes, there are plenty of entertainment discounts you can take advantage of when you’re a senior. But that doesn’t mean you don’t still need to budget and plan for such activities.

I’ve discussed in previous blogs how healthcare can consume a large portion of your retirement savings. You may not realize just how much you’ll need to save, however.

Recent financial studies noted that the average 65-year-old couple retiring today can expect to spend more than $245,000 on healthcare over the course of two decades of retirement. And that doesn’t even include what they might spend on long-term care. Estimates from other studies reveal much higher numbers–up to $377,000—also excluding the cost of long-term care.

If one or more than the above three expenses is something you hadn’t fully taken into account, there’s still time to save. If your retirement is still a few years off, start making changes now that will bring you closer to your goals.

For example, if you can try to save and invest an extra $500 a month for the next five years, it could make a huge difference. Even if your investments only return 5% per year, you’ll still have saved an extra $33,000 at the end of that short period.

Another option is to delay your retirement by a couple of years so you have more time to save and invest for your future. One final way to increase your savings is to look into part-time work opportunities during retirement. This option could not only be a fulfilling use of your time, but it could help you achieve more of the retirement goals for which you may have not properly planned.

Finally, a financial professional can help you calculate the cost of each of the above expenses you may have underestimated in retirement. He or she can analyze how much each could cost according to your personal situation so you know what to expect and how much more you’ll need to save.