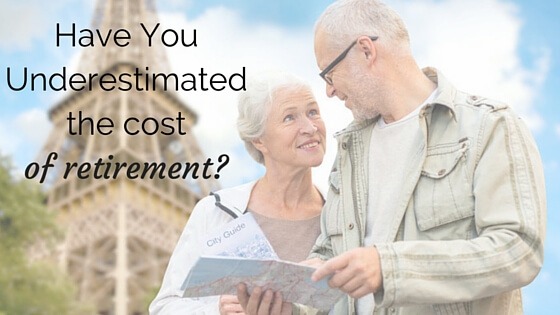 Have You Underestimated the Cost of Retirement?

Have you heard or read your expenses will drop by 30% in retirement? If so, you’re certainly not alone. The problem with this assumption, however, is that it’s not ringing true for many retirees that have already exited the workforce.

While this may come as a surprise to some pre-retirees who were counting on certain numbers to last them through their golden years, it’s not a shock to retirement experts who have been studying retiree expenses for a number of years.

One reason for rising expenses can be explained simply by the effects of inflation, which has resulted in higher food and consumer product expenses. It’s also caused retirees that spend their winters in such states as Florida and Arizona pay more to do so. Lifestyle costs of the modern retiree have also gone up in recent years, which have additionally contributed to rising expenses for the golden years.

Following are more detailed explanations of the reasons why retirees’ current assumptions about retirement have changed:

As improvements are made in medicine, retirees are living longer. This not only requires more money to account for longer lifespans but also extra funds to cover the cost of medical expenses during one’s older years. Health care costs are one of the biggest expenses that many retirees fail to adequately plan for. No one likes to think of him or herself in a less-than-healthy state, but it’s always better to be safe in terms of having ample funds to cover possible medical conditions, than coming up short. It’s important to remember that while Medicare does cover some medical expenses, it may not cover everything you might need for major healthcare needs. Read this previous blog for more information.

Something else to factor in is the scarcity of company pensions offering an extension of health care benefits throughout retirement. Today, retirees are faced with mostly self-directed health plans where they have to foot medical bills on their own.

Along with higher health care costs, many retirees of today are still paying off mortgages and/or making car loan payments, which obviously also puts a dent in their monthly income.

According to recent studies, the retirees of today are much more active than they were two decades ago. Engaging in various hobbies, dining out, and extensive travel all contribute to more expensive retirement years, especially during the first decade. If retirees fail to properly plan for all the new activities they’ll be engaging in during their golden years, however, they may run into some financial issues.

Instead of focusing on that old statistic of your expenses decreasing by 30% in retirement, set some new expectations. Focus on your particular needs and desires during your golden years. For instance, if you know you’ll still have mortgage payments for a few years during retirement, but you also know you want to travel, make sure you’re accounting for that in your savings and investments.

If you do some planning and realize you’re short of your retirement goals, you might consider working a few years longer to build up your savings, or accept lifestyle limitations after you retire.

Finally, if you’re on the verge of retirement and know the amount you have in the bank and the number of years it needs to last, then sit down with a financial professional plan your retirement according to that. In this day and age, you need to be more realistic in terms of what you’re going to spend in retirement in order to make those precious funds last.