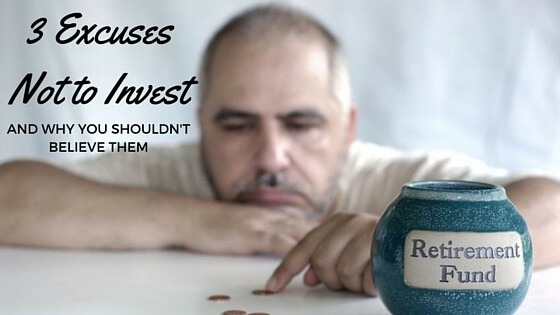 When it comes to investing, there is a wealth of excuses for why people aren’t doing it. In a recent study, a majority of Americans cited not having enough extra funds as a primary reason, but most don’t realize if they invest even a little extra each month, it can go a long way.

More than 50 percent of Americans don’t invest anything, according to a 2015 study from Bankrate.com. While not particularly surprising, this figure spotlights the serious problem of people neglecting to adequately save for retirement. What will happen when these younger generations retire? If they don’t do something about it soon, it might not be pretty.

Following are some of the most common reasons why people are holding back from investing, and why you should try to change your mindset if you’re one of them.

Unless you live on or below the poverty line, you can most likely free up some money to invest by cutting other expenses. This is where making a monthly budget comes in handy. Start out designating a small percentage of your paycheck toward an automatic investment fund, such as an IRA or 401(k). Then, every time you get a raise or pay off some debt, gradually increase the percentage of your investment contributions.

If your employer offers a work-sponsored retirement plan, you should especially strive to designate enough of a percentage for your contributions to be matched. If not, that’s free money you’re leaving on the table.

Even if your employer doesn’t offer a 401(k) plan, you can still open an investment account like an IRA to build up retirement savings. It works the same way as a 401(k): a certain amount will be automatically withdrawn from your checking account and invested in designated funds. Chances are, you won’t even miss that money, and you’ll be thanking yourself later when your investments begin paving the way for your golden years.

Have you heard this one yet? It might seem strange, but some people believe that investing in your own future is selfish because it’s taking money away from your children, or charities to which you could be contributing more.

In reality, however, the opposite is actually true. Investing is actually one of the most selfless things you can do, because it means you’ll be providing for yourself in retirement instead of depending on your family or the government when you can no longer work.

3. Investing while you’re young is unnecessary.

Do you have a desire to retire wealthy or retire young? If you’re a millennial, you better start saving young.

If you put away $300 per month into various investment funds that earn an average 7%, then your $144,000 investment could be worth $791,948 at age 65. But if you wait until age 35 and invest the same amount, your $144,000 will be only be worth $368,000, or less than half of what it could have been. This is a prime example of why saving early is actually one of the most important things you can do. Even a little bit can go a long way toward building up your retirement fund.

The bottom line: Investing is a crucial step in saving for retirement. Contributing small amounts to a diverse portfolio can eventually grow into a large enough nest egg to sustain you throughout retirement. But the key is to get started sooner than later.