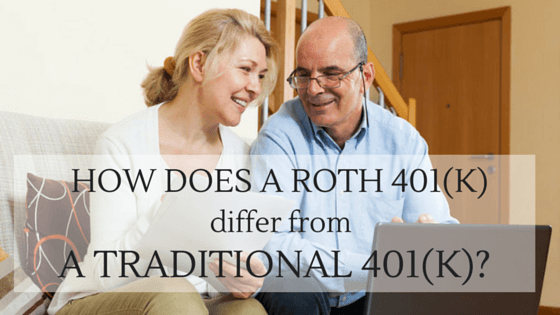 You’re probably very familiar with the traditional 401(k). It’s offered at many work places throughout the country as a way to save for retirement.  It’s also a great way to jump start your nest egg, especially if your company offers matching funds.

Another good alternative that is often overlooked is the Roth 401(k). Considered a “sister” to the traditional 401(k), it’s now offered by more than half of employers. But less than 10% of workers are taking advantage of it. Of course, that’s mostly due to the fact they aren’t quite sure what it is.

With that in mind, let’s discuss some of the benefits of this retirement savings tool so you can decide whether it would be a good fit for your situation.

This means contributions aren’t made pre-tax as they are on a traditional 401(k). Instead, they can be withdrawn along with investment earnings tax-free in retirement. Traditional 401(k) distributions, on the other hand, are taxed as income. The major benefit to younger employees in particular is that they typically earn the lowest salaries, and are therefore paying low tax rates. If they choose to contribute to a Roth 401(k), their contributions are locked in at that current rate. The question is, would you rather pay a lower tax rate now with a Roth 401(k), or a potentially much higher one down the road as you would with a traditional 401(k)?

This helps you avoid the required minimum distributions (RMDs) the IRS requires you to take from a 401(k) when you reach age 70.  If you don’t need the funds yet at that age, you can leave them in the Roth IRA for as long as you like. That way, they can keep growing in a tax-free manner.

The initial appeal of a traditional 401(k) is the fact you can contribute funds to it tax-free. But the risk behind this savings vehicle is that you’ll have to pay taxes on those funds when you withdraw them in retirement.

You’re required by the IRS to start taking distributions from your 401(k) by age 70. By that time your tax bracket could be considerably higher than when you first opened the account.

The significant downside to the Roth 401(k) is that the after-tax deferral takes a bigger chunk out of your paycheck than a traditional 401(k).

Also, if you opt for a Roth 401(k) while you’re earning a high salary and are in a high marginal tax rate, you could pay much more than what you’d owe in retirement with a traditional 401(k).

Maybe it’s too hard to decide whether a traditional 401(k) or Roth 401(k) would be better for your situation. Why not split the difference?

You could make contributions to a Roth 401(k) early in your career. Then you could switch to the traditional version as your salary peaks. Some employers will also let you split contributions between both accounts.

With this option, you’ll diversify your options in retirement in terms of tax treatments. That way, no matter what happens with the tax rate, you won’t have all your eggs in one basket.