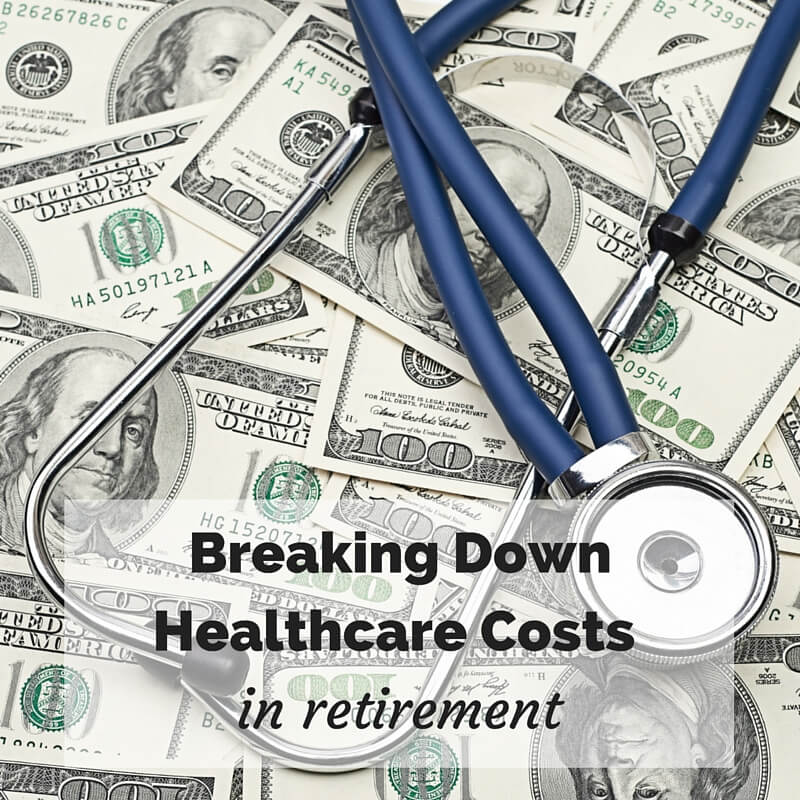 Breaking Down Healthcare Costs in Retirement

Are you concerned about the cost of healthcare during your golden years? If not, perhaps you should be. It’s not a secret that such costs have skyrocketed over the past few decades, which has resulted in more employers dropping the option to continue health care coverage into retirement. Currently, only about 35% of employers are offering this option, down from 66% two decades ago, according to a recent Investopedia piece. This means there’s a good chance the planning and funding of your healthcare could be solely upon your shoulders come time for retirement.

If your general health is good heading into retirement, there is a better chance your health care costs will be lower than average. But just to give a general picture, an average 65-year-old couple can expect to pay $163,000 in out-of-pocket expenses for health care during retirement, according to the Employee Benefit Research Institute. This number does not include long-term care, such as a nursing home.

If you’re one of the lucky retirees with some leftover employee benefits, the average cost is around $550 a month before age 65, and then drops to around $230 per month after 65 with the assistance of Medicare. Meanwhile, retirees with no employee benefits will be forced to buy a private health insurance policy that could cost more than $1,000.

Medicare covers basic health care for retirees over age 65 and is broken down into four different parts. For those retirees that have paid into Social Security the last 10 years, part A is free at age 65 and covers basic hospitalization.

Part B isn’t a complimentary coverage option. But, if purchased it will cover 80% of costs involved in outpatient care, physician services, durable medical equipment (scooters, wheelchairs, oxygen tanks), and other medical services such as lab tests, ambulance rides, and a variety of health screenings.

Offered by private insurance companies, Part C Medicare-approved plans, also known as Medicare Advantage, offer seniors the same coverage as Part A and Part B, along with several added benefits.
The coverage in most Part C plans includes prescription drugs, as well as hearing, vision, dental and fitness options.

In order to enroll in Part C, seniors must already have Part A and Part B coverage in place. They must pay Part C premiums in addition to what they’re already paying for Part B.

Even though Part C plans typically offer some prescription drug coverage, Part D plans are also offered as a standalone product to those with Original Medicare. As with Medical and Part C, retirees must pay Part B premiums along with the premiums from Part D in order to receive the coverage.

Medicaid is a support program for low-income, low-asset individuals who would otherwise not be able to afford the premiums of the regular Medicare system. Eligibility varies by state; see the Medicaid website for more information. Medicaid also covers long-term care costs, both for nursing home and at-home care, which Medicare does not. Medicaid doesn’t cover prescription drugs, but it may pay the premiums to enroll in part D.

Medigap plans, which are also referred to as Medicare Supplement plans, were created to cover the gaps in Part A and Part B.  With the latter two plans already in place, a Medigap policy can cover some co-payments, coinsurance, and deductibles. Some Medigap policies can even help pay for international medical care. In order to keep a Medigap policy in effect, certain premiums must be paid in addition to Part B premiums.

While Medigap plans do help shoulder some of the medical costs not covered in Part A and Part B, the Part C plans typically offer a much wider range of coverage. You should take note that Medigap policies have not offered prescription drug coverage since 2005.

If you’re concerned about the gaps in your healthcare coverage during retirement, it may be a good idea to set up a health savings account in order to help cover future medical expenses. Just like an employee retirement savings account, contributions are taken straight out of the paycheck on a pretax basis and are sometimes matched by employers, and then deposited into an account where it grows tax-free until it’s withdrawn. If your company doesn’t offer HSAs, you can still set one up via various financial institutions. The contribution limit in 2015 is $6,650 (married filing jointly), while those 55 and over get an extra $1,000.

Those who wish to retire before age 65 may already be suffering from some age-related ailments but are unfortunately unable to qualify for Medicare.

One way to combat this issue if you are 63.5 or older is to extend health coverage from your former employer through the Consolidated Omnibus Budget Reconciliation Act (COBRA) until you are eligible for Medicare. This extended coverage is more expensive than what an active employee would pay, but it is much less expensive than a private policy would be. An added benefit of COBRA is that it is identical to the previous plan, so the person keeps the same doctor and coverage of prescription drugs with no concerns about pre-existing conditions.

Note: In addition to the above options of coverage during retirement, the Affordable Care Act (ACA) has added free services for the elderly. These include screenings for several types of cancer, bone density, diabetes, cholesterol, and more, while fixing the dreaded hole in prescription drug coverage in Medicare. Get an overview of the new ACA coverage from the U.S. Department of Health & Human Services.

This is an optional, but important type of coverage to consider adding to Medicare or other health insurance plans. Long-term care covers services such as nursing homes or in-home care. Only those that qualify for Medicaid receive complimentary long-term care coverage; others could be faced with costs as high as $80,000 per year for nursing homes, or $25 per hour for in-home services.

There are many different healthcare options in retirement, most of which come at a cost. It's important to explore all your options in order to figure out what type of coverage is the most beneficial for your health–and your wallet.