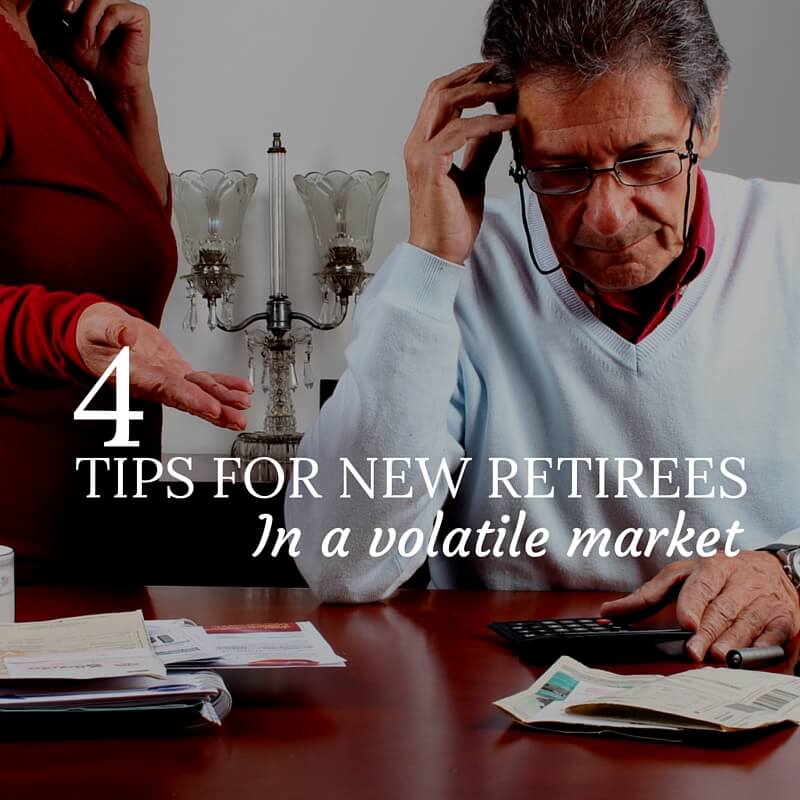 4 Tips For New Retirees in a Volatile Market

The market’s recent volatile nature has raised concern among a number of investors, both young and old. Perhaps the group that feels they are most at risk, however, is new retirees. The up-and-down stock trends may be reminiscent of the national economic downturn of 2008, when many pre-retirees held off on starting their golden years, were laid off, or forced to retire after losing a chunk of their 401(k) savings.

So how should new retirees handle the recent stock market roller coaster ride? In short, pay attention, proceed with caution, and don’t panic.

One of the worst possible scenarios for recent retirees in a volatile market is to withdraw more from their 401(k) and IRAs than just dividends to cover living expenses.

According to a recent CBS Money Watch article, this behavior is referred to as “sequence of returns risk,” and could cause one to lock in investment losses with his or her withdrawals. If retirees lose too much principal this way, they might not have enough money left if and when the market recovers.

Instead, try to cover your basic living expenses with guaranteed sources of retirement income such as Social Security, a monthly pension, and/or an immediate fixed annuity. By doing so, you’ll be able to breathe a little easier and weather the market downturn, and you won’t be forced to do anything drastic if the market continues to plummet.

The first signs of a storm can be tempting for some to jump ship and sell everything (stock market-wise) that they have. Remember a drop of 50 percent could realistically happen, and when you’re retired and dependent on your investments to cover your living expenses, you have to be prepared to endure those kinds of losses. If you don’t think you can bear such a downturn, however, then selling some stocks now may not be a bad idea if it prevents you from selling down the road at an even lower price.

Before making any dramatic decisions, however, you should realize that even today, the Dow is above the level it was less than two years ago. If it hasn’t dropped that much since the day you retired, then your situation may not be as bad as you think.

Seeking out a reliable professional who is trained in the complexities of retirement income is something you should do before anything else. He or she can offer valuable advice depending on your situation, which can help you make more informed decisions as to how to handle a volatile market. Having an experienced professional come alongside of you and suggest appropriate stock investment strategies will also give you a peace of mind.

This is a good strategy for producing a retirement income stream in a volatile market, because your investment cash flow doesn’t shift up and down as much as the value of underlying investments.

Even in the midst of a down market, companies don’t reduce or eliminate their dividend payments. They will do so if they are making less money, but that hasn’t happened yet and probably won’t as long as the U.S. economy is intact.

Bottom line: A well thought out strategy to generate retirement income will give you a peace of mind and help you fully enjoy the golden years you worked so hard to reach. Part of that strategy is planning for the day when the market takes a dramatic plunge, an event that could easily happen during your lifetime. Being prepared for such an occurrence will help you feel much more calm when the storm actually hits.