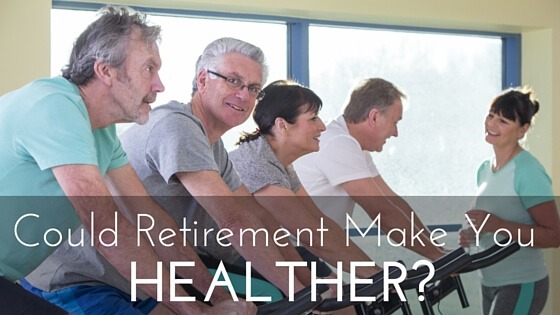 Could Retirement Make You Healthier?

You’re probably aware (and hopeful) of the benefits retirement can bring to your emotional wellbeing, but did you know it could produce some major physical benefits as well? A new study by Australian researchers in the American Journal of Preventive Medicine suggests retirees actually have healthier habits than those who are still working. These researchers studied a group of 27,257 men and women, 3,106 of whom had retired during the three-year study period.

Retirees were compared to those still in the workforce, and the study analyzed health factors such as sleep, eating habits, physical fitness, and drug and alcohol use.

Retirees were also asked the reason why they retired. Some were eligible due to age, while others retired due to a desire to travel or start a second career, spend more time with family, or care for loved ones. Others retired due to health problems or a lack of job opportunities.

After the researchers took health risks into account, they discovered that on an average, retirees walked for 17 minutes more a week than their still-working peers, and engaged in moderate-intensity exercise 45 minutes or more per week. Retirees in the study also slept around 15 minutes more a night than they did while they were working. Interesting, female retirees were more likely to quit smoking than their peers who were still on the job.

Researchers found no major contrast between retirees and those still working, in terms of healthy eating and alcohol use, however.

Even though the study didn’t document any of the participants’ type of occupation and the follow-up period was short, researchers were still highly encouraged by the results. The lead author of the study, Melody Ding, said the study allows people to look at retirement in an optimistic light. But she warned that even though the results suggested retirement has a positive effect, there are still people that have negative experiences both emotionally and physically. It’s important not to over-generalize the results, she said.

The bottom line: As you look toward retirement, think about the areas of life that you would like to improve during your golden years. Meeting with a financial expert to make sure your money situation is in line with your goals is one of the first steps to a smooth transition into retirement. Hopefully some healthy habits will also follow.