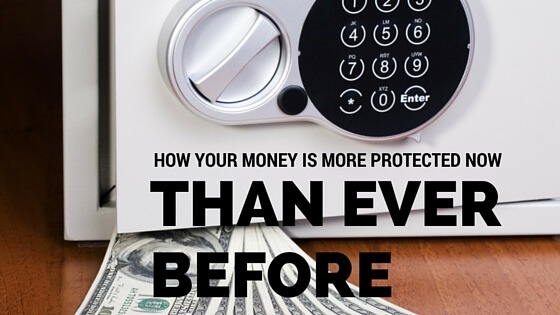 How Your Money is More Protected Now Than Ever Before

It’s comforting to know that in the wake of the 2008 economic downturn, several reforms have come about to help people better protect their hard-earned money. Our country has learned from its mistakes, and is now striving to put safeguards in place in order to help prevent another recession of such magnitude.

While you many not personally feel much more financially secure than you were eight years ago, following are four important changes were established to ensure your finances are more effectively protected.

One major change that went into effect after the financial crisis of 2008 is increased consumer protection via the Consumer Financial Protection Bureau (CFPB). Before 2008, if you had an issue with a credit bureau, you could file a complaint with the Federal Trade Commission, it was questionable whether you’d ever receive a response.

The CFPB, on the other hand, takes consumer complaints seriously and makes every attempt to resolve the issue. In fact, Sen. Elizabeth Warren, who helped set up the bureau, told NerdWallet.com that in just a few years, the organization had already returned more than $11 billion to families that were cheated by big banks and other financial institutions. NerdWallet stated the CFPB has returned $3.45 billion in restitution and $7.75 billion in principal reductions, canceled debts and other relief to affected individuals.

Gone are the days when predatory colleges could easily advertise programs they didn’t really offer, fake job placement rates, and use illegal debt collection practices. The U.S. Department of Education will now cut off federal financial aid for-profit schools need to function if they commit such fraudulent deeds. In fact, in order for those schools to have access to any federal aid, they must prove their average graduate’s student loan payment takes up less than 20% of discretionary income, or 8% of total earnings.

On Feb. 8, the Department of Education announced it would create a new Student Aid Enforcement Unit to more quickly investigate complaints of illegal conduct by schools receiving financial aid.

“Bounce protection” or “courtesy overdraft” was supposedly established as a service to bank customers so they could get approved for ATM or debit card transaction even when they didn’t have sufficient funds in their accounts. But this meant a hefty $25 to $35 fee would be slapped onto whatever purchase one made that was over the amount in his or her account. Worse, many consumers didn’t realize they had signed up for this “service” until they had racked up significant overage fees.

Banks are now required to ask customers if they want to sign up for courtesy overdraft coverage. A much better option is to check your statement balance often—especially the times of the month when it may be getting low–and consider getting true overdraft protection that’s tied to a savings or credit account.

It’s no longer such a simple task to obtain a mortgage. While many consumers find the extensive credit checks and paperwork a laborious process, in the long run, it’s a good thing lenders are now sufficiently checking one’s income, assets and other debts to assess his or her ability to actually pay a particular monthly mortgage.

On the flip side, in the early 2000s, lenders could earn more if they enticed consumers to sign up for loans that started out at attractive introductory rates, a few years after which they skyrocketed upward. This is where millions of Americans got into trouble in the midst of the economic downturn.

Read this previous blog to figure out what kind of house you can afford.

Even with these new safeguards in place, it’s still possible to be taken advantage of by companies that value their own profits over treating their customers with fairness. That’s why it’s important to keep watch over your own finances to ensure you’re not becoming victim of any questionable schemes.